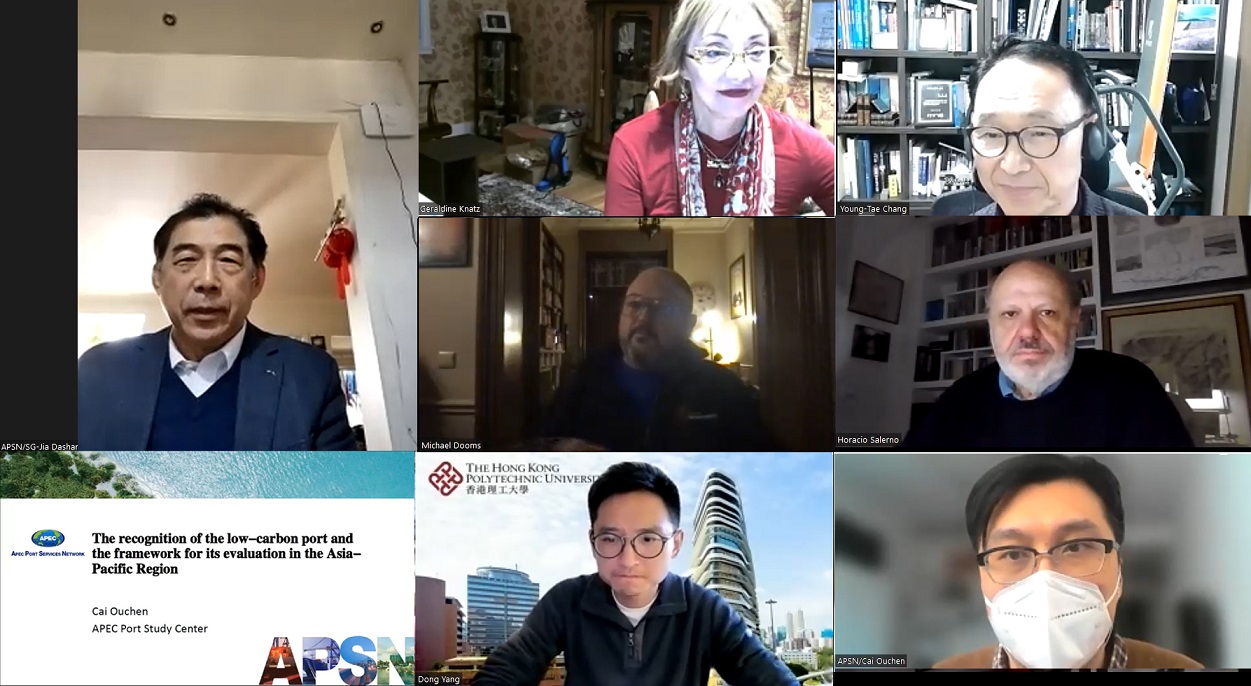 The APRO Webinar on Concept and Evaluation of Low-carbon Ports was virtually held by the APEC Port Study Center on December 15, 2022. Dr. Jia Dashan, Secretary General of the APSN addressed the opening remarks, and Mr. Cai Ouchen, Deputy Director of the Study Center briefed the meeting the findings and conclusions of the research project by the Study Center on the recognition of the low-carbon port and the framework for its evaluation in the Asia-Pacific region. Five Experts were invited to join the roundtable discussion on the research findings and conclusions, which are (a) Dr. Young-Tae Chang, Professor of Inha University, and former Chair of the APRO; (b) Dr. Michael Dooms, Associate Professor of Vrije Universiteit Brussel; (c) Dr. Geraldine Knatz, Professor of the University of Southern California, and APSN Senior Consultant; (d) Mr. Horacio Salerno, former Associate of Arup; and (e) Dr. Yang Dong, Associate Professor & Associate Head of the Department of Logistics and Maritime Studies of the Hong Kong Polytechnic University, and former Program Coordinator of the GPAS. In addition, there were other participants from the economies of China, Japan, Malaysia and Viet Nam working for government, industry, international organization and academia.

During his opening remarks, Secretary General Jia Dashan pointed out that there was still a huge gap for the port industry to make efforts limiting the global temperature increase to 1.5 Degree Celsius, and the APSN would continue to contribute to the green, low-carbon and sustainable development of the APEC port community. He also required the Study Center to improve its research as well as the port certification and awarding system of the APSN based on the great advices from the invited experts.

After listening to the report on the research by the Study Center, the invited experts made comments and suggestions as the following:

a) Due to the price of petrochemical energy is expected to remain high, renewable energy applications such as wind and photovoltaic powers have been widely utilized in global ports. Thus such initiatives should be highlighted in the evaluation system;

b) Vessels and trucks contribute the largest shares of carbon emissions in ports, as response ports should play an active role in the supply of alternative fuels. In addition, the EU has put forward the latest requirements for the MRV of carbon emissions from ships and relative carbon trading market mechanisms. All of the above facts should be taken into account in the establishment of the evaluation system;

c) Port authorities or operators are unable to achieve the carbon emission goals by themselves, but need to take extensive cooperation among other ports, port communities and relative stakeholders. It is recommended to set up specific evaluation indicators representing the above factors in the evaluation system;

d) For the next step, it is recommended to clarify the scoring criteria of the evaluation experts for relevant evaluation indicators; and

e) The validity and effectiveness of some indicators should be considered, such as the effectiveness of low-carbon investments, the potential negative impacts of low-carbon actions on employment and regional environment, the applicability of circular economy indicators for ports without vast hinterland, the feasibility of using the same indicator system for ports of different types and developing degrees, and the burden on the ports caused by the requirements for providing too much data.